Fancy Brudgom
"Tactical Village" is the 19th episode of Season One of the FOX television show Brooklyn Nine-Nine. It originally aired on March 4, 2014.

The precinct attends a mandatory training course where Amy runs into an officer she used to date. Meanwhile, Captain Holt is unable to quit playing a game on his phone, and Rosa is angry at Charles for not inviting her to his wedding.

Charles walks through the bullpen handing out cards, his STD’s. Save The Dates for his wedding with Vivian, everyone begins to tease him and make STD related jokes, until Hitchcock comes over and announces he has an STD. (Credits roll).

The Precinct 8:02 am, Jake excitedly runs past everyone in the briefing room high fiving and wishing everyone a “happy tactile village day.” He explains to Holt how exciting it is, trying out new weapons and a training situation like being in an action movie. Charles adds that Jake has been nominated for coolest kill but hasn’t won it yet, but he desperately wants it. Even though it’s a children's karate trophy.

Holt comes out of his office to ask Gina for some copies of a transcripts that are required. She doesn’t respond nor take her eyes away from her phone. Holt gets very close to her face and tries to get her attention, she looks at him and she explains she was playing Kwazy Kupcakes (with a backwards W). She shows him how it works and he tells her to get back to work.

On the bus, Jake tells everyone his alias for this year, Rex Buckingham British secret agent, ballistics expert and ladies man. Amy teases him about the ladies man part and Jake questions how he’s different from George Clooney. Amy says that George Clooney has a sexy voice, this spurs Jake to put on a deep sexy voice saying some sexy phrases such as; champagne, mountain range, hugs. Amy decides shes had enough and leaves to talk to Rosa. Charles excitedly asks what’s going on with the two of them but Jake quickly squashes it.

NYPD Tactical Village 10:32 am, the detectives are getting off the bus. Sarge is on the phone closely followed by Rosa. He hangs up frustrated and tells her that the babysitter is busy the night of Charles’ wedding. Rosa is confused that the date has been set already, as she was unaware. She explains that she thinks he’s been avoiding her, she concludes that she’s not invited and he’s scared to tell her.

Holt is sat alone in his office playing Kwazy Kupcakes when Gina comes in he quickly slams his phone face down onto the desk and attempts to act nonchalant. He tries to quickly dismiss her but she stays and asks what he’s doing. She tries to get to his phone which leads the Captain to reveal that he was playing Kwazy Kupcakes. Gina admits that it’s addicting but Holt is sure he’ll be fine as he as plenty of self-control and deletes the app.

The Nine-Nine enter the tactical village declaring their arrival. As they set their bags down Teddy calls out to Amy and she goes over to hug him. Jake heads over to find out who he is, Amy introduces Teddy and says they met at code camp a refresher course for police codes. Teddy leaves to go and sign in leaving Amy to tell Rosa that they dated last year but due to their locations it fizzled out. After Amy and Rosa leave Jake is talking to Charles about it and Charles insinuates that he’s jealous.

NYPD Tactical Village 2:21 pm, Amy and Jake we out in the courtyard testing new guns, Teddy approaches and gives her a code test. Jake throws an easy one in and makes a rude joke. Teddy invites Amy to look at some new handguns and Jake tags along.

Rosa is being shown a device, PUW (Portable Ultrasonic Weapon), it shoots sound directly at where it is being pointed and can harm and incapacitate a perp. She gives it a try and shoots it directly at Charles who immediately starts doubling over in pain she turns it up and he’s covering his ears and writhing around on the floor. Sarge instructs her to stop and turns off the weapon.

Gina is looking for Holt in the bullpen but can’t find him, she goes into the men’s bathroom and hears the sound effect to Kwazy Kupcake. She finds Holt sitting in a cubicle playing on his phone. Gina suggests he’s become addicted to the game while Holt protests he isn’t.

NYPD Tactical Village 3:49 pm, Amy and Teddy are shooting at targets in the courtyard. Jake has a turn and shows his shooting targets on a perp as PB and J. (Penis, brains, jaw)

Sarge catches up with Rosa, she insists that shooting him with the sound cannon was an accident. Sarge reminds her of the other incident of her shooting him with a net cannon, shooting him in the back with a paintball handgun and twice in the front when he turns around. She maintains they were all accidents. She finally tells Sarge that he should tell her if he doesn’t want her to come to the wedding.

The Nine-Nine are stood waiting for their situation training when Jake slides in on his knees announcing the entrance of Rex. They all show off things they intend to use. Scully shows them that instead of looking cool by holding the gun sideways he intends to hold it upside down to be even cooler - no one agrees. The 8-2 finish and Teddy tells Amy that they had a perfect run and beat the record. After the 8-2 leave Jake rounds the 9-9 up to strategise, he’s dropped the accent and is taking it seriously.

Sarge gives the information for the simulation he partners up Rosa and Charles, Jake and Amy and Scully is to do nothing. Amy questions that he really isn’t going to be a character but he concludes he is a detective that wants to beat the record. Sarge starts the clock and they run in.

Gina enters the break room where Holt sits playing Kwazy Kupcakes, she tries to get his attention, without success. She gets close to him and tries again, just like he had done previously. He updates her on his progress within the game. He finally admits that he has become addicted and it’s affecting his work. Gina hatches a plan, she leads Holt up to Hitchcock’s desk and asks where he is up to. He tells her the same place as Holt and he immediately throws his phone in the bin.

Jake and Amy are kicking down doors and taking out perps in the simulation, the stop to celebrate that they are almost finished and have a moment together. Sarge walk and feeds them more information of where the other perps are, they head off.

Rosa and Charles are walking stealthily through a corridor, Charles shoots a perp just as hes firing on Rosa, she decides that now is the time to have the conversation about her not being invited to the wedding.

Sarge is talking Jake and Amy into the room where hostages are being held, he asks if they want to wait for back up but Jake wants to beat the record. He comes up with a plan to walk in and give up, he enters with his guns in each hand above his head surrendering. They point their guns at him and he begins to lower his guns to the floor, as he’s doing so he shoots the perps with his guns upside down. He calls for time... they broke the record!

The 9-9 is back clearing their things, when Jake arrives they all celebrate and applaud him. He hands out prizes he’s collected for them all. (The t-shirts with roles written on them) Jake reflects and begins to consider taking things seriously all the time but quickly talks himself out of it with boobs and farts. They start leaving to go and get drinks but Amy tells him that she’s having dinner with Teddy but will catch up with them after. Jake heads out looking disappointed.

On the bus, Charles joins Rosa and says he’s talked to Vivian and hands her an STD.

At Shaws, Holt congratulates the 9-9 on the perfect run and beating the record, Jake responds by congratulating Holt on beating the Kwazy Kupcakes addiction. Gina apologises to Holt for telling his secret.

Charles joins a sullen looking Jake at a table, he ponders what Amy sees in Teddy. Charles answers honestly and suggests that she went out with Teddy and not Jake because Teddy asked her. This gives Jake food for thought.

Rosa approaches Vivian at the bar and thanks her for inviting her to the wedding and promises not to make it weird. Vivian is clueless as to why it would be weird so Rosa acts weird and walks away.

At the precinct, Amy says goodbye before leaving and Jake at he’s up with her showing off his trophy, that he bought himself. He builds up to ask her something and Charles looks on expectantly. He instead gets distracted and asks about her lipstick, she reveals shes meeting Teddy again which knocks Jake’s confidence. He instead plays it off as a work thing and she leaves. Scully then comes over and says he can help with the work thing.

Rosa: Right, that's the guy you said the lame stuff about, like he's a good listener.
Amy: I'm sorry, what do you look for in a guy?
Rosa: I don't know, real stuff: shape of his ass.

Jake: Man, I feel so good! It almost makes me wanna start taking things seriously all the time but then I'm like: boobs, fart, boobs, whatever! 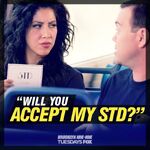 Charles: So Rosa Diaz, will you accept my STD?
Rosa: I look forward to having it forever.