The Overmining
"Skyfire Cycle" is the 8th episode in Season Four of the FOX television show Brooklyn Nine-Nine. It was originally scheduled to air on November 1, 2016 as the 6th episode but was preempted when a World Series Game #6 became necessary. It aired on November 29, 2016.[1]

When famous author DC Parlov receives death threats, Jake and Terry take the case, so that Terry can meet his lifelong hero. Back at the precinct, Gina forces her way into the Boyle clan of cousins in an attempt to choose the location of the annual Boyle family vacation. Meanwhile, Holt's anger peaks when Amy chooses Kevin's side in their argument about a math puzzle.[2]

Still on the night shift, the squad is forced to stay in the briefing room while a janitor waxes the floor. Jake, seeing an opportunity, announces that he's going to slide from Holt's office to the elevator.

Jake starts sliding and when he's halfway through the bullpen, the elevator doors open to reveal Holt. Jake gets inside the elevator just as the doors close. After a few moments, the doors open again with Holt and Jake stepping off. Expecting Holt to be mad, everyone instead cheers as he raises Jake's hand and celebrate him successfully doing the full bullpen.

Back to working, Jake is watching a news report while commenting on how the 95th Precinct are getting cocky because they're on TV. He mentions then that everyone's been on the local news. Rosa asks which case of his was on the local news and it cuts to a flashback in 1998 where Jake is being interviewed.

Apparently, the case the 95th Precinct is working on is about death threats to author DC Parlov. Terry overhears them and tells them about The Skyfire Cycle and how Parlov inspired him after sending him a letter. After Terry walks away, Jake decides he wants them to take the case so that Terry can meet his hero.

While Charles is writing their arrest numbers, Gina approaches him about a family vacation with the Boyle's where her mom wants her to go. The vacation is in Iowa and Gina suggests that they go to Aruba instead. Charles also notes that they've already rented the tent.

Back in the bullpen, Amy and Rosa are approached by Kevin and Holt about an argument they're having. It turns out to be a math problem called "The Monty Hall Problem". The situation is that there are three doors, one of which has a car behind it. After choosing a door, the host opens a different door to reveal that it's empty. The host then asks if you'd want to switch. Amy starts to mull about the problem as Kevin and Holt argue about it once more. When Holt ends the arguement noting that Kevin can't even do simple addition, Amy says that Kevin is right. Holt says Amy's fired.

In the break room, Jake tells Terry that the 95th Precinct gave them the DC Parlov case. Terry tells Jake to give it back because he doesn't want to meet his hero. Jake insists that Terry should meet him and tell him how much he changed Terry's life. Parlov arrives at the precinct and Terry starts to get nervous.

Jake welcomes Parlov to the precinct and introduces Terry to him. Terry shies away and Jake takes over the questioning. They ask Parlov about who he might think is threatening him and he thinks it might be one of his male fans. Jake comments about how boys should be fond of a lady dragon but Parlov tells him that the dragon isn't a sexual being and Terry quotes a part of the book.

With the revelation that he is a fan, Jake reminds Terry to tell Parlov about the inscription Parlov wrote to him before. Parlov says that he remembers writing to Terry and that he's proud he made something of himself.

Back in the breakroom, Charles is greeted by his cousin, Sam, who had already spent time with Gina. Sam apparently agrees with Gina that their vacation should be in Aruba instead of Iowa. Gina reveals that she scheduled to meet with another of his cousins and also convince him to vote for Aruba.

Meanwhile, Jake and Terry start on the Parlov case. Parlov is in town for a reading of his new book and the death threats were sent from New York. Terry comes up with the theory that the perp must be sleeping on the street with the other fans. They then hatch a plan to let them sign a petition so that they can try and match the writing with the threats. Knowing they wouldn't fit in, they arrive at the location in costume.

Holt enters the bullpen and Amy greets him a "good evening". He says that it isn't because he hasn't slept as continues to think about the math problem and he finally understands Kevin's side and how he's absolutely wrong. Amy tries to convince Rosa to help her explain to Holt the answer to the problem, but Rosa states that the math isn't the real problem. She explains that the reason why Holt and Kevin are so agitated is because they haven't seen each other since the night shift, declaring that they just need to have sex, much to Amy's disgust.

Back at the venue of the reading, Jake and Terry are approached by a fan who wanted to sign their petition. The fan tells them that if they actually want Parlov to listen to them, they have to send a message in blood. They deem the fan as their first suspect.

When they're back at the precinct Jake is handed the book so he could see that the quote the fan said was in it. Upon flipping through the pages, Jake sees the inscription Parlov left on it and it matches the handwriting on the threats. After confirming that the writing is a match, Jake and Terry discuss why Parlov would send himself threats. They both decide to go to Parlov's hotel to get the story straight.

In the bullpen, Amy is on the floor and Holt approaches her. She tells him that she lost her grandmother's ring. It was a ploy to get Holt to listen to the logic behind The Monty Hall Problem but before anything happens, Holt gets riled up when Rosa mentions that he and Kevin just need to bone.

At Shaw's Bar, Gina and Charles meet up with the Council of the Cousins to discuss the location of the vacation. They both present their cases to the Boyle clan and Sam tells them that the council will sleep on it and they will vote the following morning.

Jake and Terry arrive at the hotel Parlov is staying at and start asking him questions. When he denies that he didn't send the death threats and he doesn't need publicity, it is revealed that he didn't write the inscription in Terry's book. They get the name of the assistant who wrote for Parlov but at Terry's disappointment, he also tears his book apart.

After they get back at the precinct, Jake tells him he found the address of the assistant. Seeing Terry's sullen mood, he tries to cheer him up. When it doesn't work, Jake gives Terry a pep talk.

In the break room, Gina and Charles are talking to Sam on the phone and Sam announces that the Boyle's are going to Aruba. Gina wonders why Charles is smiling and he tells her that she was too busy trying to convince them to go to Aruba, she didn't notice she became a Boyle herself.

Holt arrives at the precinct and Amy tells him that she contacted a math professor. Holt tells her that it isn't necessary anymore because he already made up with Kevin. Not because they solved their math dilemma, but because Rosa was right.

Jake gets to the assistant's apartment and the perp almost gets away before Terry manages to block his way. Terry tells him that he's right and Jake manages to pants him when he was about to give Terry a hug.

Terry: This is the best day of my life!
Jake: You have three kids, Terry.
Terry: I said what I said!

Gina: I'd tell you to pack sunscreen but, hmmm, looks like you already got burnt.
Charles: Oh, did I? *licks the back of his hand* 'Cause my skin still tastes pretty raw.

Rosa: It's not about the math, they haven't seen each other because of the night shift. They just need to bone.
Amy: What? Gross! Rosa, those are our dads! I mean-- that's not what I think. Captain Dad is just my boss.
Rosa: Wow.
Amy: Nevermind, I'm teaching father the math! 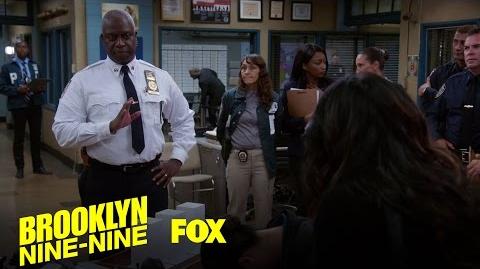 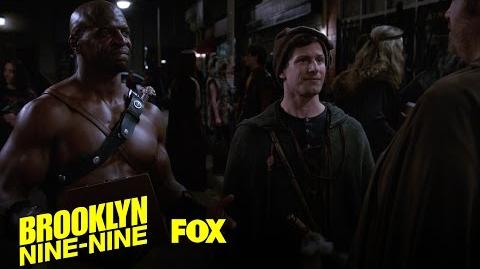 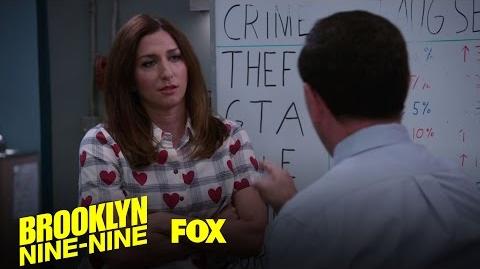 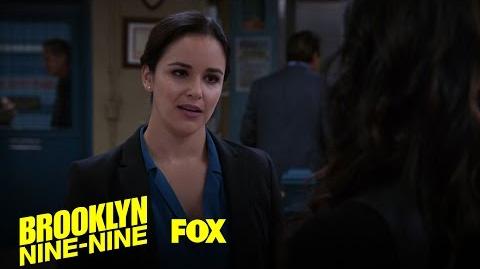 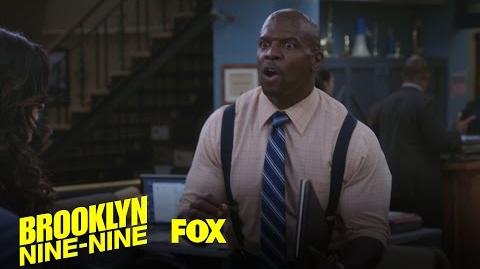 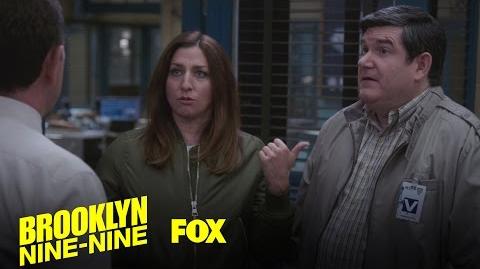 Boyle Calls For A Council Of The Cousins Season 4 Ep. 8 BROOKLYN NINE-NINE 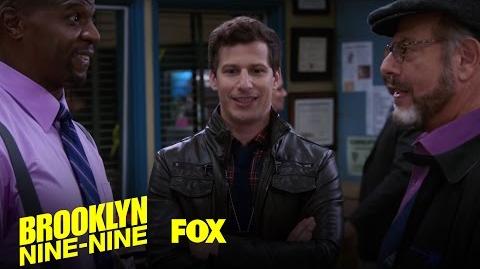 Terry And DC Parlov Recite A Famous Passage From His Book Season 4 Ep. 8 BROOKLYN NINE-NINE
Add a photo to this gallery

Retrieved from "https://brooklyn99.fandom.com/wiki/Skyfire_Cycle?oldid=25852"
Community content is available under CC-BY-SA unless otherwise noted.